It’s back! The game that will seemingly never die has been released yet again. Just like last time I’m thrilled. I know what I’m getting and since this is just an upscaled version of the Gamecube version I have no fears of it being re-imagined (ruined).

The game starts up and looks just like the Gamecube version with the low-res zombie waking up on a gurney perfectly intact. My nostalgia senses were going crazy at that point. The game feels just like the older one with one major difference that I refuse to accept. 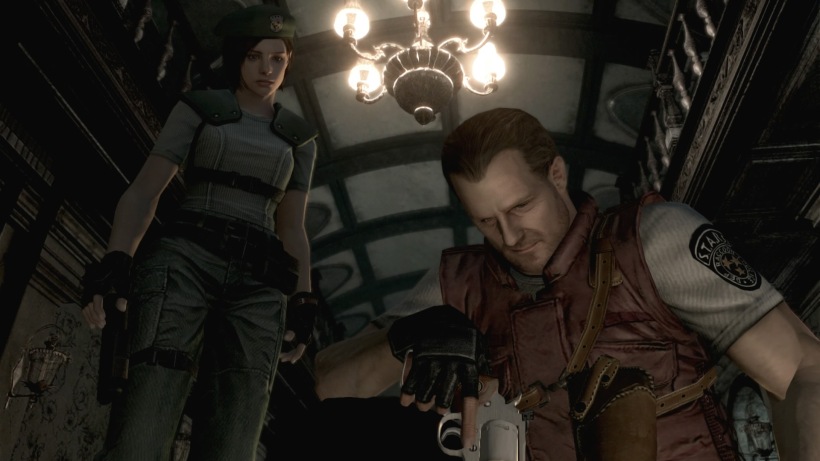 I. Love. The Tank Controls. In the new version you can control Jill or Chris with the analog stick and it works perfectly. But for me, I use the old style controls because that’s how I’m used to it. I use the old school Control Type C where you press a shoulder button to move forward. It works great for me!

The main advantage to the new analog control is that it instantly makes the game more accessible to new players due to the familiarity with other third person game controls. It also instantly makes the game easier as you can dodge, circle and escape pretty much anything now. The game’s AI is still based on the tank controls so the new moves, while not game breaking, allow you to exploit the AI almost unfairly.

So how does it look on the new consoles? In a word, amazing. The gameplay and just entire presentation holds up very well. It’s such a good looking game, and not just for an older title, but full stop. The game looks fantastic. The mood, lighting and overall atmosphere sets the tone for a creepy, survival horror game. I still fire up the Gamecube every October just to play this game around Halloween; now I can play it widescreen and have an even better experience.

If you haven’t played the original Resident Evil, and you should, this is the version you should play. The original PS1 version is still a good play and the mechanics are virtually the same, but Capcom knew what they were doing with the remake and the overall experience is solid. This is Resident Evil as it should be played. I hope this sells well and encourages Capcom to not only remake Resident Evil 2 and 3, but make a new Resident Evil in the same style and bring it back to it roots which fans have been calling for for years.