I have played a lot of games in my time. From the lowest reviewed shovelware to the top tier blockbuster games and lots of games in between those. It’s that segment of games that I want to focus on. The games that were good enough not to be a throw away, but not quite reviewed as well as you may think.

So what do I mean by an average game? I am going to talk about the my favorite games that may not have been the most well received either critically or commercially. My base requirement is that it should have a Metacrtic score of 70 or less. If a game was reviewed well, but didn’t sell that great I will save those for another article. This one is all about lukewarm receptions for otherwise great games. This is just my opinion of course. So let’s jump in!

First off, I want to mention that Deadly Premonition will not be on this list. It’s typically on every list about these kinds of games. To be honest it would be at the top of this one as well so I’m just going to skip it. Great game though, go play it.

How could such an amazing concept not be universally loved by the masses? A chainsaw wielding cheerleader, wearing her boyfriends head as an accessory, fighting zombies. That screams fun. Granted it’s a Suda51 game which has always attracted a very core, niche audience. Apparently that audience includes yours truly. I loved the game. It’s very campy and very self aware which is a trait I love in video games.

The game is big on action with a new zombie or monster to take down at each turn. The action is fast and flows decently well with a few flaws. This biggest flaw being that the cheerleader feels very weighty. Granted she is carrying a gigantic chainsaw so it only seems right but it just doesn’t feel like other action games. Jumping, turning and even attacking all happen with a sense of weight to it where it feels just delayed enough that you noticed but put up with it since the game is so much fun.

I can easily see why it didn’t blow away the critics but it’s a fun game and very cheap now. Like most games like this it’s on the short side of things where you can finish it in a handful of hours. It’s worth it. 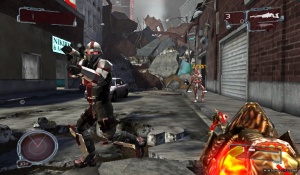 Here is a game that is close to my heart. When this came out I was hardcore riding the Wii train. That’s right, I said it. I was even the only person to pre-order this game at my local GameStop. Didn’t care. All I knew was that the Wii was finally getting it’s first shooter that was built from the ground up for that system. The reviews were not very kind, unless you belonged to my household. I had a blast with it. To be fair, I was going into it wanting so badly for it to be good. My fanboy blinders were on in full effect.

Luckily it was good. I had a blast with this game. The control scheme worked well enough, if not a little clunky. There were plenty of times that all of a sudden I would be staring at the sky spinning around almost uncontrollably but when I was paying attention and dialed in I had a hard time putting it down. That’s my biggest gripe with it. You had to make an effort to keep the Wilmore orientated correctly. I could never just forget about the controller to where it became second nature like I can with a normal controller.

Graphically the game looked and ran fine. People said it looked like a slightly better looking PS2 game and it certainly does. But it’s a very clean looking game with good lighting and effects for a Wii game. The 2nd game is good too and worked with the Wii Pro Controller although it has major dead spots in the analog sticks.

Talking positively about this game on the internet is similar to walking in to a firing squad. I can feel the verbal guns pointed at me as I type this. But hear me out. It’s a good game, and I want to emphasize game here. It does not have a very good story. The surprise plot twist at the end even had me groaning at it and I am a big fan of this game. However, that aside, this is one of my favorite games of last generation. The ability to play as Nathan Spencer in a 3D environment is such a fun experience, especially since they got it right. The controls are a little tricky to get used to but put in the time and it feels very good. Swinging from place to place gives a great sense of speed, height and ground coverage.

The game has a big focus on melee combat using the arm but guns are available to use as well even if ammo is a bit sparse for an action game. They are all satisfying to use though with the shogun, called the spyker, being one of the most satisfying shotguns I’ve ever used in a game.

Graphically is where the debate rages on even more than the story. The “new” look and attitude of Spencer was not very well received. However given that I was never a big fan of the old Bionic Commando games, a sin yes I know, and the fact that I decided to buy into the back story they gave him as to why he’s in jail I was perfectly fine with his new look. It made sense to me. I can appreciate fans of the series being upset by it. If they did something similar with Nathan Drake I would be singing the same dissatisfaction Bionic Commando fans did. But, get passed that and there is a fun game here.

Let’s be honest, this is a mediocre game at best. I’m not surprised in the least at it’s score. That said, I also consider it a hidden gem for those that like a challenge. This is not an easy game, but it’s also not very hard. It’s challenging due to the fighting system which is trying to be realistic and maybe it is, but it’s not very fun. It’s kind of satisfying at times but overall it’s very clunky and slow. And not the good kind of slow like in Dark Souls, it’s just slow.

The medieval setting is nice and the graphics are done very well. I really liked the main protagonists and enjoyed playing as both of them. The voice actors brought them to life and actually did a very good job making them feel like real people. The production values of a lower budget game like this are fantastic. It’s the gameplay that lets it down.

But the missions are so short that you get a feeling of satisfaction from clearing them. Not to mention the game itself is fairly short. It has that affect some games do where you go “Ok, just one more” and you get hooked. Or at least I did. I had a hard time putting the controller down and finished it in two days. There’s just a certain something that this game has that keeps you going. 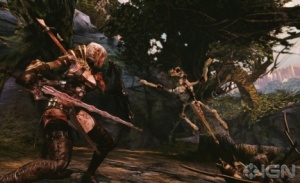 This game has occupied a lot of my time. I don’t know why but I love this title. It’s my go-to game when I just want to kill some time and have a blast. You get to play as either an archer or a mêlée dude. Both can do either but they have their specialty. I always play as the archer since the game is not exactly hard but you would do yourself a favor by keeping some distance between you and the enemy. There is a bit of cheapness to be found here and you will die.

The game is fun though. It has something that keeps me playing it. An X factor. This is the first time I think I have ever recommended it to someone and that’s a shame.

It’s a great third person action title with a decent and easily understandable story. It’s told in an interesting way and makes you keep going. Aside from a few areas that are harder than they need to be, it’s a fun game that can be completed in a day.  The graphics are good, the action is fast and the interactions between the main characters can be interesting. There is a twist at the end that will make you want to play through it again to get the other ending as well.

So those are my top five “average” games. I could make list after list of my top average games, and I may! But these were the ones I had in mind when I thought of making the list.

What about you? Agree? What are yours?