My predictions are going to be guessing games. Following the predictions and playing the games, I will post a review of the games and go over my predictions of whether or not they would be good purchases. I will ask myself one question, should I rate this game as Buy or Die?

I am looking forward to the release of the game and my prediction is that it will be fun and exciting. I think it will be nice to unwind with a little Hyrule Warriors and unleash the power within me on some baddies.

Long and Stressful Day? Why Not Let Loose with some Hyrule Warriors!

Hyrule Warriors is a truly smashing game. In it, one can smash villains willy nilly with their over-the-top weapons of choice. In trailers released by Nintendo, Zelda is seen fighting off the bad guys with her sword, bow, and the wind waker. With these different weapons, players can now smash multiples of everything from bushes to bad guys with one single swoop. If you haven’t seen the gamplay already you must. 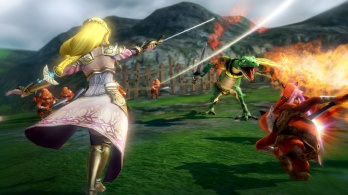 Something new for the Zelda series but not entirely new for Nintendo is the huge roster of playable characters. They have everyone from Link and Lana to Ghirahim and Valga. Characters from various Zelda games are now playable and this should be exciting to all Zelda fans! Before Hyrule Warriors, the only way players could play as a character other than Link for an extended period of time was through the smash brothers games.

Sheik and Link in SSB Wii U

My personal favorite was the Zelda/Sheik character. I loved being able to majestically blast my enemies with magical fire, or teleport to other areas of the stage, or even change my clothes in just a few short seconds and suddenly become a speedy ninja. Being able to play as Zelda/Sheik was a lot of fun since it was out of the norm to play as a character other than Link. However, now with the great roster of characters, one can play as whomever he/she chooses! Do not get me wrong, I do enjoy playing as the valiant hero Link, but a change will certainly be nice.

Nintendo had been struggling economically until fairly recently with the release of Mario Kart 8(A game that I highly recommend). At E3 just this past summer, Nintendo allowed visitors to play Hyrule Warriors at Wii U stands, and they also debuted an upcoming game Zelda U which is supposed to be similar to Skyrim. But why am I writing about other games that Nintendo is releasing when this is supposed to be about Hyrule Warriors? Well, that’s because Nintendo is changing, with changes coming as soon as September 26. Nintendo is leaving its traditional style and changing to a new style of Zelda. The games will be getting edgier, bigger, and it will truly give the gamers what they want. Hyrule Warriors will be a fun game not only because I can smash all of the bad guys at once, but also because it is the start of a new era of Zelda.

If you haven’t seen the trailer already, view the video shown at E3 here