I wanted an excuse to buy a Vita and Uncharted was nearly reason enough I thought. So I waited a bit and with all the bugs of Remote Play squashed I figured those two things together was enough reason and I bought one. Little did I know that Uncharted was worth the price of admission alone. I’m a huge Uncharted fan, it’s probably my favorite game series of all time if not tied with Resident Evil. Uncharted: Golden Abyss tries very hard to continue the magic of the PS3 trilogy and in many ways succeeds.

I bought the Borderlands bundle since it came with a memory card already. It was the cheapest way to get what I needed. I already have Borderlands 2 on PC, 360 and PS3 so I figure what’s one more system. Luckily I had Uncharted free, I downloaded it onto my PS3 months ago when it was a PS Plus free game because I knew one day I’d get a Vita. I will end up getting a physical copy soon since that’s how I roll.

So back to the game. I decided to start it up just to check it out. I started my Vita adventure by firing up Borderlands and, as usual, it got it’s hooks in me. So I was going to sample Uncharted and get back to Borderlands. Well, five hours later I was still playing Uncharted. I realize that the game pales a bit in the story and dialogue department when compared to the console versions but the voice actors do such a good job with what they have that I still feel some of that magic. The presentation is more than acceptable and the game looks absolutely gorgeous. It’s similar to the first Uncharted in terms of graphics which is not exactly a bad thing. The few screenshots here do not do it justice, in motion the game is incredible for a handheld.

Drake moves, jumps and feels exactly like he should. That is an accomplishment since this was handled by Sony Bend studios and not Naughty Dog. It feels great to play. The shooting is also a bit floaty just like the console games. The snap auto aim is effective which is handy given the sensitivity of the Vitas analog sticks. Climbing and platforming is done well and is very responsive. If you are familiar with and like the console games you can jump right in without missing a beat.

The story is acceptable and keeps the game moving along. It’s been criticized a bit in reviews but I’m fine with it. All I need is good gameplay, well developed and acted characters and a reason to press on. This game provides that in spades. Just like the Uncharteds that came before the pacing is fast and there are little to no breaks in the game. It’s hard to find a good spot to stop, the game makes you want to keep going and going.

Sounds amazing right? Well for the most part it is but there are some downfalls that are worth talking about. And what I’m talking about are the touch controls. To be clear they work as designed and work very well at what the developer designed them for. My frustration, and there is a little frustration, with the controls are not in the functionality but the design of them. You can basically play the game entirely with touch controls. Running, fighting, climbing, everything can be handled with touch. Sometimes using the touch controls for climbing is very helpful and easier than with the traditional method but I use the standard controls 99% of the time. The only time I use the touch or motion options is when the game forces me to. The worse offender is the log balance mechanic where on nearly every log, ledge or pole that Drake walks across over a gap he slips and needs to regain his balance. You have to tilt the Vita to keep him from falling. It’s used a lot. It’s not fun. In fact the only times I have died have been when doing forced touch or motion control scenarios. 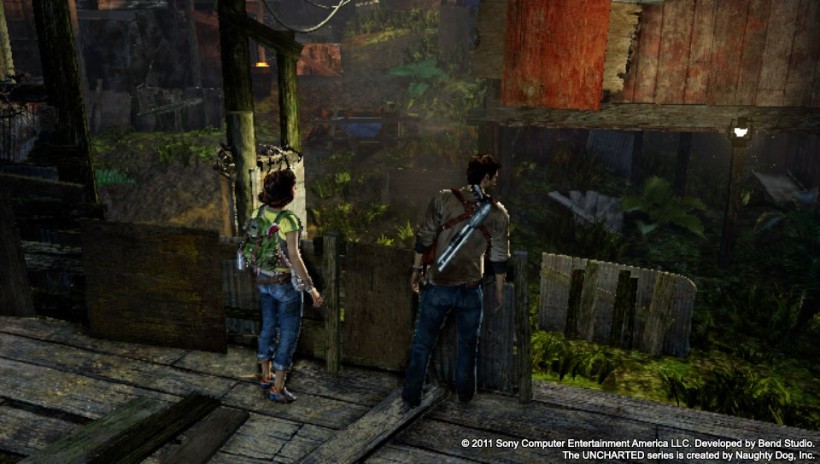 All in all I can’t get enough of this game. As it’s the prequel to the first game I think when I’m done I will fire up the PS3 and go through the trilogy again. If you are on the fence about getting a Vita I would say bite the bullet and do it, get Uncharted and have a great time. There are a lot of very good Vita games anyway so use this as an excuse to jump in. It may seem a little late to the game as the system has been out for a few years and has lost support for major titles but early first and third party triple-A titles are still available cheap and worth the price of admission. Plus the amount of smaller titles is growing rapidly and bigger titles are also still being released for the system.  I can’t recommend this game highly enough.