I was a fan of this game the first time I played it on the PC. I ended up buying it on the Xbox360 as well. It’s easily one of my favorite games in recent history. I was a fan of the original Tomb Raiders as well back in the PS1 days which may be a reason I enjoy the reboot so much.

With the lack of games out for the PS4 I decided to pick up a copy of Tomb Raider: Definitive Edition. I figured I already know I like the game and have played through it multiple times now, enjoying it every time. So if the PS4 can offer up an even better experience then I’m game, and as soon as I fired it up I could tell it was going to be a great experience again. 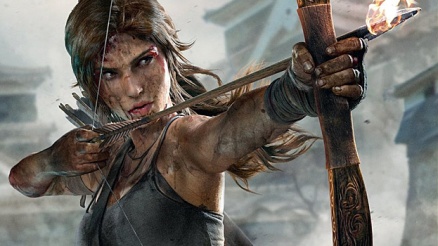 The most noticeable change wasn’t the look of Lara, it was the overall performance compared to the 360 version. Running at a solid 60fps is instantly noticeable and the overall game just runs great and looks sharper. Lara looks different and while I can appreciate the increased detail I didn’t have a problem with the model from the 360 version.

The game now also rewards you for playing in a dark room as it makes use of the PS4’s controller light. When you light a torch it flashes red and yellow to mimic a flame, likewise when you fire a gun it flashes a bright light to simulate a muzzle flash. It sounds a bit corny but when playing with the lights off it really adds to the atmosphere of the game and draws you in just that much more.

Another happy discovery was the use of the controller’s speaker. This game has a ton of dialogue spoken via two way radio and it now echoes through the controller speaker which just makes it sound more like a radio should. It’s a small touch, but does not go unnoticed. It can be disabled in the options menu if it’s not your cup of tea.

There are increased levels of detail nearly everywhere, better fog, draw distance, particle effects and lighting which all add up to a much improved presentation. But enhanced visuals aside the use of the PS4 controller and steady 60fps is enough to win me over with the new version. If you never played the new Tomb Raider, this is the one to get. If you have the initial release still and was wondering if this is worth a repurchase I can honestly tell you yes, especially if you want to grab a solid game for the PS4 as we wait for the library to grow.