It’s no surprise I like this game. I’ve posted many boss fights with more to come as well as talked about my adoration for this game on Monday Vlog #4. I finally finished the game and am ready to talk about it. I may mention Dark Souls many times, not unlike other reviews, so get ready for that.

So why do I like this game? Simply put it takes just about everything that the Souls franchise does right and accurately translates that into a 2D action, platformer RPG. Right from the outset you can tell this is going to be a game that requires precision, great hand to eye coordination and lots of patience. 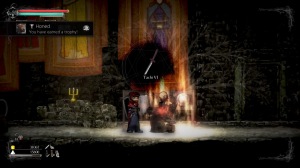 Best. Sword. Ever. Well the best one I could use anyway.

The first thing I noticed was the beautifully hand drawn artwork of the game. The characters ooze personality in the way they are illustrated but at first it did take some getting used to. The heads look odd to me but slapping a helmet on fixes that. The game lets you customize your character a bit and select a class. I chose to be a Cleric as that class has served me well in Dark Souls. I assumed I would do a strength/faith build like I usually do in DS2 and be off and away.

That plan was put to bed early on when I realized that the weapons scale differently than the souls games. The weapons tell you what stat they scale with and that’s the only way to up your damage without upgrading the weapon. A weapon may only have one stat that it scales with. I started out with a dagger due to selecting Cleric and it scaled only with Dex. So I pumped my upgrade points into Dex. That makes sense right? Well that also limited my weapon selection. In order for me to swap to another weapon I would need to find one that scales in Dex or my prior upgrade points would be a waste. Luckily I did find a sword that scaled with Dex later on and used it for the rest of the game and maxed out the upgrade on it.

A had a few weapons that scaled with both Dex and Strength but the base damage was so low that my Tachi sword was miles better. I was doing 100 damage with it by the end of the game which trivialized a few bosses. The Witch of the Lake was a pushover for my build even though it has given a lot of players trouble. However bosses like the Coveted were very tough for my build. So there are always tradeoffs.

Like Dark Souls there is no hand holding. You learn the story from exploration and talking to NPCs. You also typically get tips from them on where to go. Luckily the world is small enough to where you have freedom to explore without feeling like you are way off course. The  game is also generous with sanctuaries which act very similar to bonfires in Dark Souls. A sanctuary is where you will level up, make an offering and fast travel if you have the right items. You level up by killing enemies and collecting salt, and it works nearly identically to the Souls series except you upgrade via a skill tree as opposed to just pumping points into whatever stat you want. Luckily the tree’s branches allow you to still follow whatever build path you want. So if you want to pump a lot into Dex, there a branch that is heavy on Dex upgrades and such. You can make offerings at a sanctuary which will allow you to add a blacksmith, travel guide, leader and other people to that particular check point. Doing so also gives area upgrades. For example if you offer an idol that gives you a blacksmith then you get an attack bonus in that particular area which helps.

From the opening moments I knew this game would capture me like the souls series. It’s just as addicting with its challenging yet rewarding gameplay. Ska studios did a great job of recreating the Souls formula in 2D. They really knocked it out of the park, and just like the Souls series there are some bosses that can be exploited…badly. Once you learn how to dodge roll effectively boss fights are much easier, but there are still some tough fights. The final boss was incredibly hard for me until I figured out his tells and patterns. Even then it was a hard fought battle that I barely won.

I encountered a few bugs, one in particular let me completely obliterate the Coveted. Since my build was not optimal for that boss and I had died a lot, I didn’t feel too bad when it happened.  Another bug has a boss stick you into a wall, which is a bug and not what’s supposed to happen. Depending on where in the wall you end up, the fight can be easily cheesed. Another issue I had was that many platforms can be jumped up onto from underneath, others you can only mantle them directly from the side and the game never really goes over this. There was a bit of a learning curve there. I also didn’t like that you are thrust into NG+ without warning, similar to Bloodborne if you don’t get the full ending. When I was fighting the final boss, I had an idea it was the last, but wasn’t completely sure. I went to the next area, talked to someone and boom, credits and welcome to NG+. I still had about three optional bosses to take on I found out later and I wasn’t ready for the game to end anyway. Not what I was hoping for after 30 hours of gameplay. 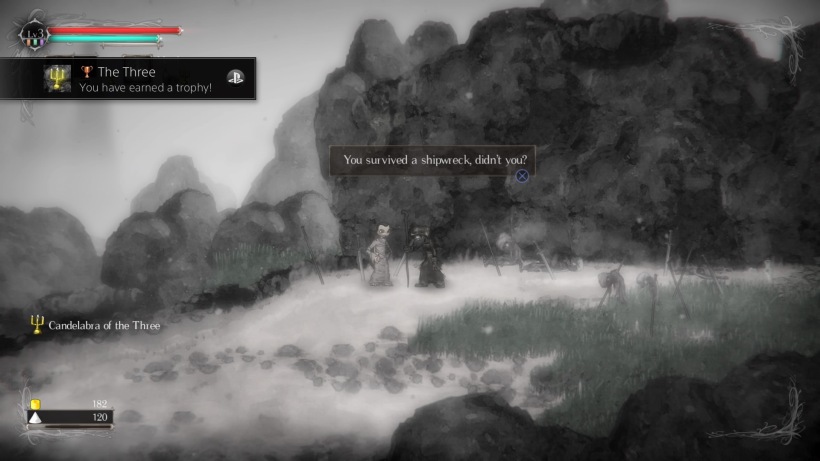 Salt and Sanctuary is a damn fine game and great love letter to From Software and Dark Souls fans alike. If you like the Souls series you will love this. I have not played many 2D platformers over the years so I was a little cautious of the title. However my fears were put to rest almost instantly. Highly recommended!